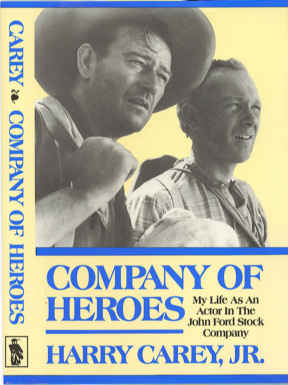 In 1959, Mr. Carey starred as Zach Morgan in the episode "Vendetta".

In 1965, Mr. Carey starred as Shelton in the episode "The Flannel-Mouth Gun".

He appeared with his father Harry Carey in the film Red River in 1948 and was inducted into the Hall of Great Western Performers of the National Cowboy and Western Heritage Museum in 2003.


It offers an intimate look at the work of Hollywood film director John Ford through the observant eyes of actor Harry Carey, Jr.   When Harry Carey, Sr., died in 1947, director John Ford cast Carey's twenty-six year old son, Harry, Jr., in the role of Abilene Kid in 3 Godfathers.  Ford and elder Carey had filmed an earlier version of the story, and Ford dedicated the Technicolor remake to the his memory.   Company of Heroes is the story of the making of that film, as well as the eight subsequent classics.  In that, Harry Carey, Jr., casts a remarkable observant eye on the process of filming Westerns by one of the true masters of the form.   From She Wore a Yellow Ribbon and Wagonmaster to The Searchers and Cheyenne Autumn, he shows the care, tedium , challenge and exhilaration of movie making at its highest level.  It is the most intimate look of John Ford ever written.

He also gives us insight and original portraits of the men and women who were part of Ford's vision of America:  John Wayne, Richard Widmark, Henry Fonda, Maureen O'Hara, Ward Bond, Victor McLaglen, and Ben Johnson.

Funny, insightful and brutally honest, Company of Heroes is a rip roaring god read that presents the remarkable life story of Harry Carey, Jr., and his many and continuing fine performances.

Harry Carey Jr's book Company of Heros, My Life As An Actor In the John Ford Stock Company has gained great notoriety. This book may be purchased by sending a Check or Money Order for $35 for hardcover, $20 for paperback. California residents add 7.75% State Tax or $3.10 for the hard cover and $1.94 for the soft cover. Add $5 for shipping and handling, $10 if outside the U.S. to:

Please specify if you would like this personally autographed by Mr. Carey.